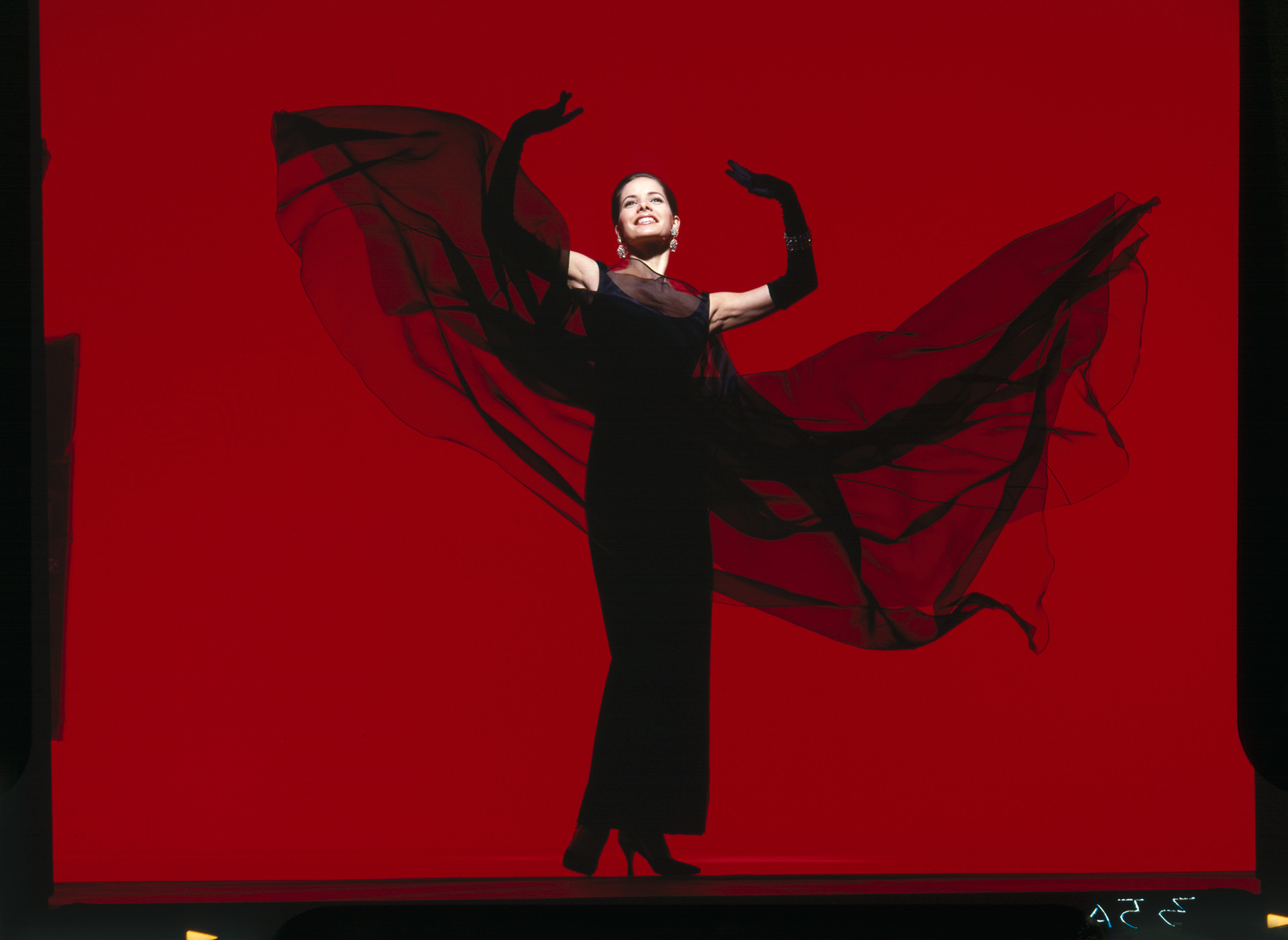 Although Darcey is currently enjoying a new lease of celebrity status it’s easy to forget what a huge impact she was making in the ballet world back in the mid-Nineties – when I first started designing for her. Her enormous popularity both here and abroad was putting the spotlight firmly back on Covent Garden and London once again, and she was one of only a handful of women I truly wanted to dress.

Because of their ‘mute’ performances, ballerinas have always enjoyed an added cloak of mystery once reserved for the sirens of the silent movies, and Darcey was also lucky to have a unique name that captured the public imagination: Darcey Bussell – one part romantic male hero, one part a word given to a swathe of skirt draped to accentuate the derriere; together the name conjures up something intensely feminine – you can almost hear the rustling of underskirts as you say it.

Darcey was exceptionally tall for a ballerina which limited her choice of male partners somewhat, but on the plus side her uniquely long-legged silhouette on stage was frequently referred to as breathtaking; she was the Cyd Charisse of the ballet world. Even if you knew nothing about ballet and had just seen her cavorting playfully on French and Saunders, leaping with willowy grace or raising a leg 180 degrees towards the ceiling as effortlessly as if she were reaching for a book – you simply got what all the fuss was about.

People often say it must be a dream job designing for a ballerina, but in truth female dancers are not actually the easiest people in the world to dress. Some have physically more in common with athletes, are often quite muscley or with over-developed shoulders, and like sportswomen they can sometimes look quite ill at ease in a long dress. And then there are those with so little flesh on them that all a designer can do is cover the chest and play up the arms and legs. Darcey seemed to get the balance just right and could switch into fashion model mode with great ease but even so, she could go from being a healthy size 10 to a pale exhausted size 8 by the end of the ballet season which meant fittings had to be carefully timed.

I created gala gowns for Darcey, including her wedding gown, from 1995 to about 2000,  just before she left to start a family. You can see in the Opera House publicity photos with Bryn Terfel (pictured) that Darcey is slightly fuller in the face and figure, and that is precisely because she is several months pregnant.

Looking back I do wonder if I dressed Darcey a bit too formally at times. Once we created a full length opera coat in stiff lilac Italian silk – double Dupioni – for her to wear to an opening. It really was a terribly grand outfit with a high rolled collar, and perhaps more suited to the Margot Fonteyn of 1962 than an ingenue ballerina of the Nineties. Having said that, it was our joint fondness for prim retro couture that had initially brought us together. Darcey’s adoration of Audrey Hepburn is well-known and the fashion editors of the popular glossies at the time likewise couldn’t resist the influence of Funny Face and Breakfast at Tiffany’s when styling her. And although these references may be a little tired today and the Audrey Hepburn makeover somewhat ubiquitous, I now realise – especially when I see some young celebrities seeking red carpet attention in frontless, backless clothes – that it does actually take a certain poise, innocence and gravitas to pull off a regal princess entrance in full demure couture. Such qualities Darcey had in abundance. They really don’t come more regal than a celebrated prima ballerina.

The late Nineties was also a very special time for the Royal Opera House itself. After its closure in 1997 for desperately needed expansion and development work, the performers got new dance studios, new dressing rooms, state of the art scenery mechanics and the public got the palatial Floral (now Paul Hamlyn) Hall extension, with escalators to a restaurant and the piazza with views over Covent Garden. Darcey of course was one of the main attractions at the re-opening night gala in 1999 when dressed as the lilac fairy from Sleeping Beauty, she symbolically and enchantingly, awoke the Opera house from its slumbers. By exquisitely merging the old and the new, Jeremy Dixon had transformed the building into something quite extraordinary: a kind of opera super-palace. Twenty years later there’s still no other evening out in London quite like it.

Anthony Crickmay’s iconic image of Darcey en pointe as Odette that was used to promote Swan Lake in the mid-Nineties was then updated by the work of Mario Testino for an early Noughties re-brand. Now it was Darcey as the darker counterpart Odile, in an equally arresting pose set against the grittier, slightly Gigeresque metal mechanics backstage that was being posted all over the London underground. No other British ballerina since Fonteyn had captured the public imagination like Bussell. Her star would continue to rise until 2006 when she announced she would play guest principal parts only, before deciding to bow out gracefully in 2007. The tragically short career span of a Ballet dancer is a Hans Christian Anderson tale in itself.

My mother had been a great ballet enthusiast, and I can remember my first trip – aged five – to see The Nutcracker at the London Coliseum. These were the days when you could casually drive into the West End! Dad would drive through Leicester Square (you could do that too in 1970) and just park up in St Martin’s Lane. Russian ballerina Galina Samsova and her partner Andre Prokovsky were the big stars of English National Ballet and I’d pore over the pictures in the programme afterwards and followed their careers for many years. So many of my earliest memories are of my mother arranging group outings to see the ballet or the opera – often in the cheapest seats high up in the gods – so keen was she to infuse friends and acquaintances with her passion for this art. And so to be sitting with mum one night at Covent Garden in the front row of the grand circle watching Swan Lake as invited guests of Darcey was quite poignant. Since my mother would freakily develop a deadly kind of leukemia the following year at just fifty-three, this time in retrospect seems even more special now. I’m so glad we both got to see the young brown-haired Darcey at the pinnacle of her dancing career.

“Her name conjures up something intensely feminine – you can almost hear the rustling of underskirts as you say it.” 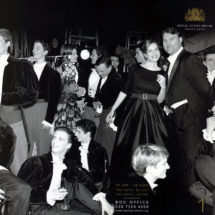 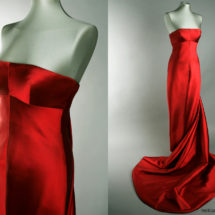 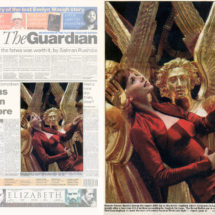 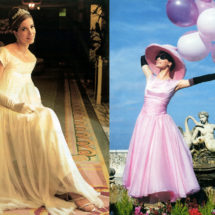 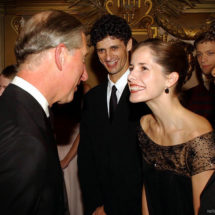 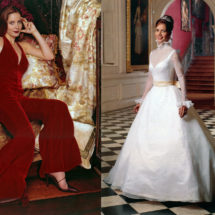 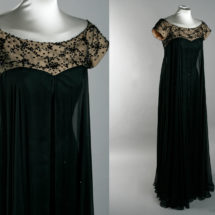 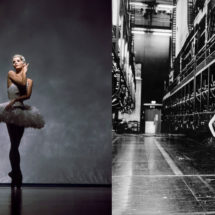 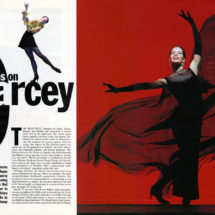 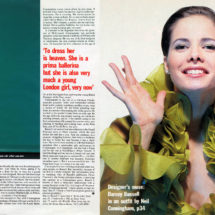