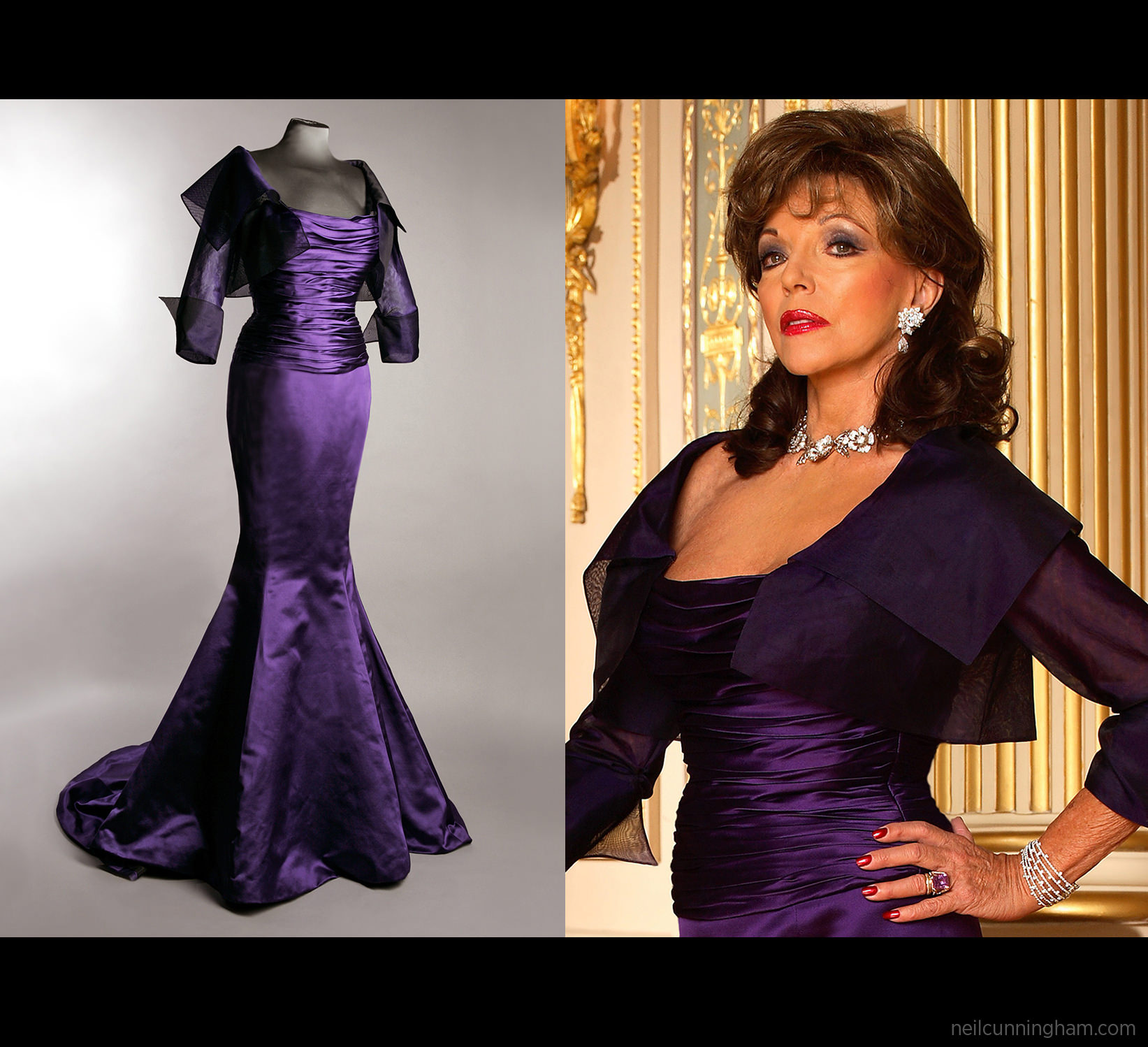 Okay, so it wasn’t exactly Dynasty calling, but when costume designer Sarah Arthur asked if I’d make a gala gown for Joan Collins for her upcoming stint in the infamous Footballers’ Wives TV (2005) series, as far as I was concerned, it was a no-brainer.

I’d spent my teenage years drawing Joan and her outfits on my rough-books at school ever since she had outraged my parents’ generation by appearing naked in The Stud. I can remember pausing on my paper round in 1979, aged fourteen, to surreptitiously flick through a copy of The Sun under the light of a lamp post at dawn. The preview pictures of Joan in her fur coat, stockings and suspenders seducing her chauffeur in the forthcoming sequel The Bitch were tantalising to a lad who still had to endure church three times a week. Those were the days when the BBFC still used X-certificate for over-eighteen films and I queued at the cinema nervously with my best mate Michelle, wearing my Reactolite Rapide sunglasses in the hope I’d look older. Joan had managed to entrance a generation of British boys and men – straight and gay – and that was before she had achieved world domination as Alexis Carrington in Dynasty.

The costume designer admitted that it hadn’t been easy trying to please La Collins. TV costume budgets don’t usually stretch to the cost of a couture dress but after a gruelling afternoon presenting outfits to the diva she was now happy to do whatever it took to find a gown that the actress would be satisfied with for a scene to be filmed at the opera house.

On the afternoon of the big arrival at the shop I had a phone call from Sarah to say that Joan wasn’t in the best of moods. The star was exhausted and fractious from travelling and one of the assistants had greeted her with a surprise kiss on the cheek. Kissing strangers is something that Joan famously takes issue with and the rebuked assistant, also an ardent fan, was understandably devastated. Sarah warned me that basically JC didn’t have the time or patience for a long session; two outfits would be the maximum she would try. Two chances then!

Joan is everything you expect her to be: cool (as in not warm), professional, clipped and courteous. For once the corny phrase: been there and done it all before really does apply and Joan knows immediately what she wants and what she likes. She didn’t like the moody lighting in the changing room – and told us so – and the first outfit was quickly cast aside. The second outfit we’d laid out for her  – a bustier and skirt of scarlet red duchesse satin – did however hit the spot. Joan pulled on the matching organza jacket herself, but the wrong way round, and when we explained that it was actually back to front and was meant to fasten at the back of the neck, rather like a bib, Joan was having none of it. She insisted it looked better this way and so the bolero jacket was re-designed and re-cut in the shape Joan preferred. I actually like it when clients have strong ideas and know what suits them and Joan has always said she might well have become a fashion designer. She chose royal purple, her favourite colour.

The one and only fitting took place at Joan’s London apartment, in madam’s boudoir no less, and I don’t think it would be ungentlemanly of me to say that first thing in the morning, sans-hairpieces and make-up, Joan was remarkably, naturally, beautiful. The Gibson household was in buoyant mood as Percy, Joan’s hubby was celebrating his 40th birthday. Our fitting was going very well too until I heard a yell from Joan: “That was my ass!!” as my fitter accidentally jammed a two-inch pin into the Collins derriere! Joan says ‘ass’ the American way (we Brits would actually say ‘arse’) so when Joan refers to her ‘ass’ in her RADA clipped accent she sounds rather like a duchess referring to a small donkey.

Thankfully there were no other altercations, although we did clash slightly over the use of accessories with the outfit. Joan wanted to wear long white gloves with the violet ensemble. I knew where she was coming from: 50’s regal glamour (very old school) but I could only see the harsh white against the purple conjuring up a Silk Cut cigarette advert or worse still the Cadbury’s Dairy Milk chocolate wrapper! I tentatively suggested black gloves and we even dyed a pair the exact matching purple of the duchesse satin, just in case Joan should change her mind, and sent them with the finished outfit, our fingers crossed.

The night at the opera scene was actually filmed at the famous Hackney Empire and hoards of extras were called in wearing evening dress to fill the auditorium. When I arrived Joan was in full costume – wearing the white gloves – with her hair piled high in a cottage loaf style. She also wore a diamond necklace and earrings, and a feather fascinator. I felt the whole look had become more of a caricature (we were only missing a cigarette holder and a fur stole) but the team seemed happy and I realised of course, that this is precisely what Footballers’ Wives is all about – high camp drama. And so the job was done.

Many months later I was delighted to receive a stunning photograph of Joan sent to me by the charming photographer Tony Ward. He’d taken this for some of the TV show’s pre-publicity and finally we got to see Joan and the outfit in stripped back simplicity – plus some whopper diamonds! The royal purple worked wonders for her colouring. The outfit became a popular staple in my collection for some time; the thickly ruched bodice hides a multitude of natural creasing at the waist. Even though the skirt is cut into quite basic princess-line panels, the duchesse satin we use is by Italian silk house Taroni (budding designers take note) and the thick lustrous weave means that the stitching virtually disappears, allowing for a strong straight-grain but virtually seamless fishtail skirt.

“ Joan pulled on the organza jacket the wrong way round and insisted it looked better this way…she has always said she might well have become a fashion designer.”

Looking back now I...